Sullivan Nicolaides Pathology is one of Australia’s largest and most respected diagnostic testing laboratories, regarded for their expertise in esoteric as much as routine testing. They are a member of the Sonic Healthcare Group, a leading global provider in pathology and laboratory medicine services.

The Biochemistry Department at Sullivan Nicolaides Pathology main lab in Brisbane processes approximately 10,000 urine samples per week. 65% of these samples are received in a 9ml urine collection tube and the remainder received in containers of various sizes – mostly urine pots or large plastic bottles – which ultimately have to be manually poured off into 9ml collection tubes for subsequent analysis.

Urine tubes are centrifuged and then tested on one of 2 Abbott Architect® c16000 chemistry analysers. The Architects analyse for up to 10 different tests – including creatinine, albumin, urea nitrogen, total bilirubin, protein, calcium, magnesium, alkaline phosphates, and glucose.

Until recently, the technicians working in the urine testing area manually decapped and loaded the urine tubes into the Architect racks for analysis.

After the analysis was completed, each urine tube was unloaded in turn from the respective analyser rack, manually capped with a push on cap and then transferred into a storage rack for archiving. Samples are stored for 7 days at 4 deg C before being discarded.

To free up the lab technicians from the tedium of decapping and recapping large numbers of tubes, Sullivan Nicolaides introduced a PathFinder 350D and PathFinder 350A, Aim Lab’s pre and post-analytical benchtop tube processing workstations into the urine section to automate this process.

After testing has been carried out on the Architects, each Architect Carrier tray is transferred to the PathFinder 350A where the completed urine tubes are automatically foil sealed and archived into a PathFinder 50 well rack for ready for storage.

Introducing a tube handling automation solution into the Urine Testing Area has lead to several benefits:

The workload is now largely done by one person when previously it required two technicians.

There is more time available for the skilled technician to focus on other daily tasks that require their attention.

99% of the urine samples processed are decapped and capped (foil sealed) automatically, reducing the occurrence of repetitive strain injuries.

There have been efficiency gains through the introduction of a linear workflow (refer to image alongside).

Aaron Lentz, a technician in the urine testing area, has worked at Sullivan Nicolaides Pathology for over 20 years over which time he has seen substantial changes in the way lab operations are constantly evolving.

Since the introduction of the PathFinders into his workflow, Aaron’s daily life has become a little easier. He finds the PathFinder solution simple to use and reliable. “You can always be assured that the PathFinders will work and just get the job done”, says Aaron. 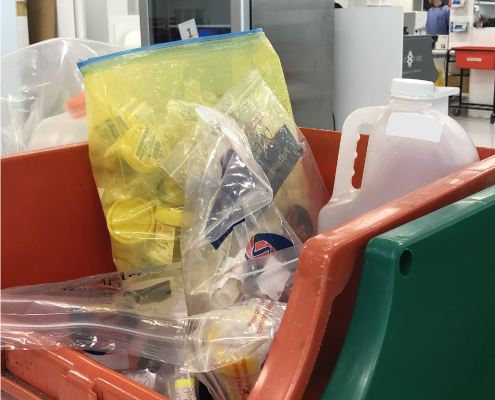 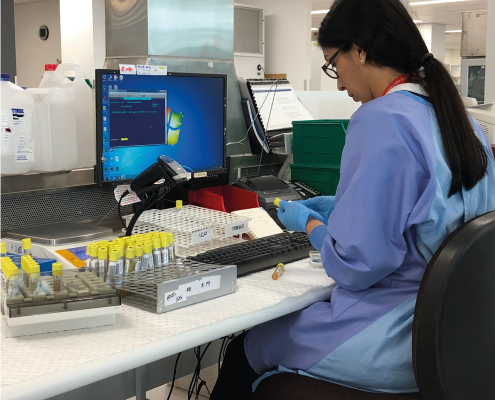 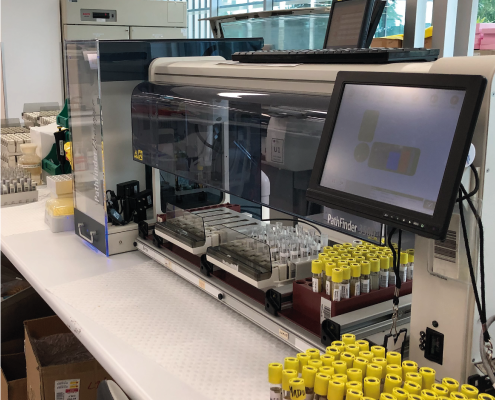 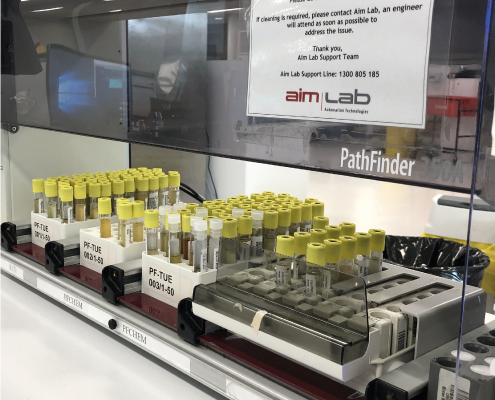 A Safer Way to Store and Retrieve Samples

This site uses cookies. By continuing to browse the site, you are agreeing to our use of cookies.

We may request cookies to be set on your device. We use cookies to let us know when you visit our websites, how you interact with us, to enrich your user experience, and to customize your relationship with our website.

Click on the different category headings to find out more. You can also change some of your preferences. Note that blocking some types of cookies may impact your experience on our websites and the services we are able to offer.

These cookies are strictly necessary to provide you with services available through our website and to use some of its features.

Because these cookies are strictly necessary to deliver the website, refuseing them will have impact how our site functions. You always can block or delete cookies by changing your browser settings and force blocking all cookies on this website. But this will always prompt you to accept/refuse cookies when revisiting our site.

We fully respect if you want to refuse cookies but to avoid asking you again and again kindly allow us to store a cookie for that. You are free to opt out any time or opt in for other cookies to get a better experience. If you refuse cookies we will remove all set cookies in our domain.

We provide you with a list of stored cookies on your computer in our domain so you can check what we stored. Due to security reasons we are not able to show or modify cookies from other domains. You can check these in your browser security settings.

These cookies collect information that is used either in aggregate form to help us understand how our website is being used or how effective our marketing campaigns are, or to help us customize our website and application for you in order to enhance your experience.

If you do not want that we track your visit to our site you can disable tracking in your browser here:

We also use different external services like Google Webfonts, Google Maps, and external Video providers. Since these providers may collect personal data like your IP address we allow you to block them here. Please be aware that this might heavily reduce the functionality and appearance of our site. Changes will take effect once you reload the page.

The following cookies are also needed - You can choose if you want to allow them: